"As a Gay Celebrant, having Marriage Equality means being able to help people from the LGBTI Community see their dreams come true." - Bronte Price Celebrant 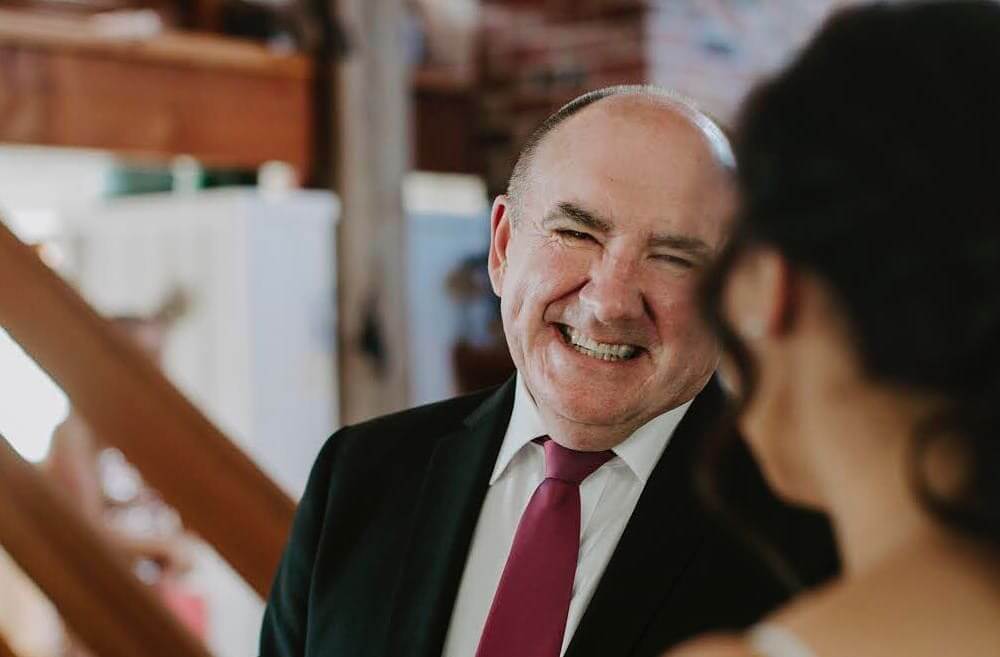 A little about Bronte Price.

I’m a full-time, out and proud gay civil celebrant, occasional kayak fisherman, vegie gardener, foodie and keyboard player. I’m happily engayged to my husband-to-be, Clint, and most Sunday afternoons will find us at DTs, one of Melbourne’s iconic gay pubs. Not only am I the proud father of four terrific sons and 7 (soon to be 8) fabulous grandchildren but Clint and I are also parents to our beloved kelpie, Bingo, aged three.

I am proud that I: 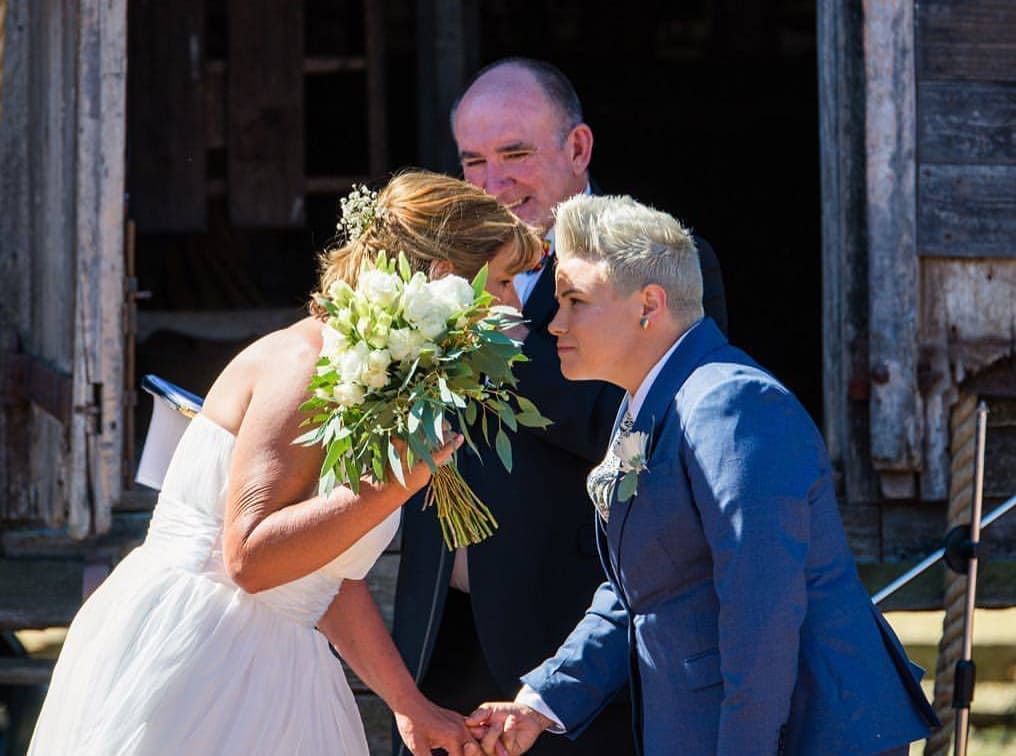 What does marriage symbolise for you?

Marriage provides opportunity for couples to promise each other some pledges that mean lots to them, in front of family and friends. In the case of LGBTI people such as us, that often means it’s done in front of chosen family. Marriage makes public what you already know and feel. And to get to do that in front of those people who mean the most to you is something that we treasure very much.

How do you personalise your wedding ceremonies for your couples?

Every ceremony I write is different. I take pride in getting to know my couples – their dreams, what attracts them to each other, their quirks, things that have challenged them as a couple. I love writing up and presenting their love story as a key part of their ceremony, if they want that made public. I also ask about particular vows, readings, music, rituals, etc – things that may have an emotional or cultural meaning for them. I frame all the parts of my ceremony around what they want. 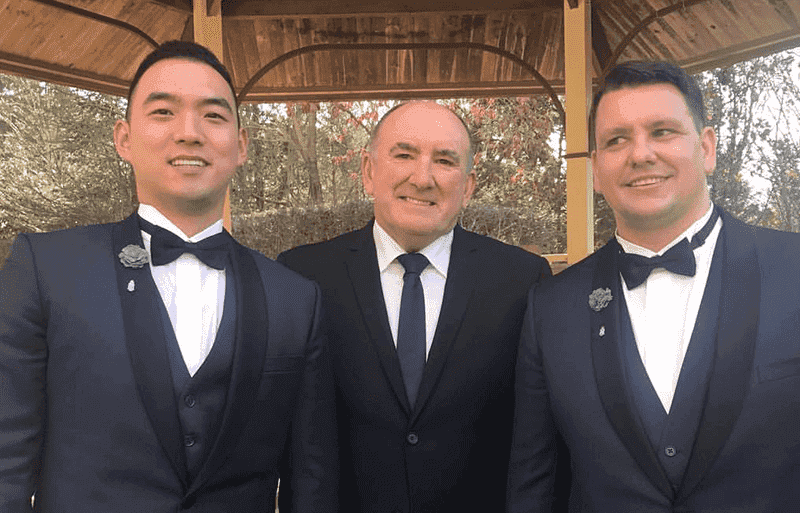 Where were you when Australia said yes and how did you celebrate?

I will never forget where I was! I was proudly assembled with thousands of LGBTI people and our allies and advocates outside the State Library. It was such a momentous occasion. For me, it was really important to be around “family” that day – and I met up with some gay mates who had gathered there, too. When the moment arrived, there were floods of tears, hugs, etc – even with complete strangers! Such a massive relief, and an emotional affirmation that we were actually part of

Australia, having been excluded – by law - from one of society’s main rites of passage until now. That night, my partner, Clint, and I got engayged. November 15, 2017 was the most memorable day of my entire life.

Now that same-sex marriage is legal, what does this mean for you?

What does marriage equality mean for me? Almost all my LGBTI couples tell me they never ever thought they would get to marry the person they love. And I’m in the same boat. Clint, my fiancé, and I never thought we’d be able to get married. Our life has always been filled with discrimination – and, over the years, we just got used to it. But now that we’re able to get married, rather than have a second rate commitment ceremony where a celebrant had to make clear to everyone present that it wasn’t a legal marriage ceremony (let’s rub it in even more!), we have begun to plan our wedding.

Our wedding will reflect how we live our lives. We don’t have gendered roles in our household, so we certainly won’t have gendered elements in our wedding. That already makes it pretty different from straight couples’ weddings. And some of the rituals will be different from the traditional wedding rituals. We’re looking forward to planning. My eldest son gets married next November, so we’re thinking we’ll tie the knot around May 2019, which gives us plenty of time to get the planning done.

Legally, getting married means we will no longer be a de facto couple with fewer legal rights than straight married couples. We will have the same rights as every other married couple.

As a gay celebrant, having marriage equality means being able to help people from the LGBTI community see their dreams come true. It’s such a pleasure meeting with those couples, sharing the thrills of seeing marriage equality become a reality in Australia and then helping them being planning their ceremony, as well as helping them with recommendations of gay-friendly suppliers.

I’m thrilled to be part of a joint venture with Nivelo Miller, owner of Equally Wed, one of Australia’s most reputable LGBTI wedding directories. We have established The Equality Network – www.theequalitynetwork.com.au to train and educate wedding suppliers about how to work respectfully and effectively with LGBTI couples as they plan their wedding. Our Masterclasses are being held across Australia throughout 2018 – people can check out the content and book in, via the website. So excited!

My last job was as an Assistant Director in Data Analytics and Digitisation with the Victorian Ombudsman. I quit that in June 2016 to become a full-time celebrant. I originally trained as a climatologist, went into high school teaching – English, Drama and Geography – and, after years in head office in the education policy area of links between schools and industry, eventually became a senior public servant in economic development and regional development. I’ve written way too many speeches and briefing papers for Premiers and Departmental Secretaries – but doing so has stood me in good stead for what I do as a celebrant. I have a BA (Hons), Diploma of Education, a Diploma of Project Management and a Certificate IV in Celebrancy.